How you travel around a new destination can be just as important as how you got there. With this in mind, we’ve collected some of the world’s lesser known, weird, and wonderful forms of public transport. 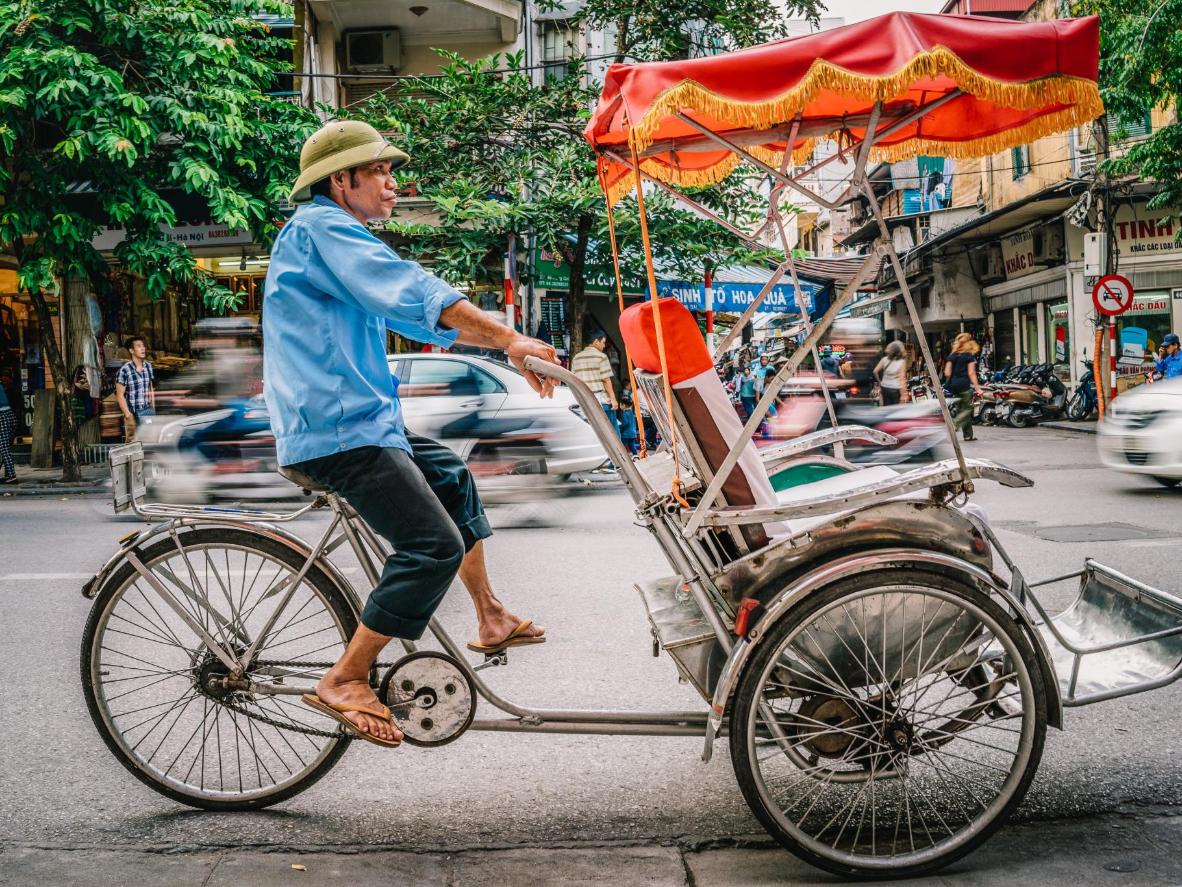 A cyclo on the streets of Hanoi in Vietnam

Cycle rickshaws (aka ‘Cyclos’) are used all over the world but in Vietnam they’re practically a way of life. Known locally as xích lô, these three-wheel-bicycle-taxis (easy to see why they shortened the name) appeared in Vietnam during the French colonisation and, unlike the French, they never left.

The passengers – usually one, although two can fit – sit at the front of the Cyclo and the driver sits behind, propelling them at top speed through the consistently hair-raising traffic of Hanoi, Ho Chi Minh City, Nha Trang, and other Vietnamese cities.

Tip: You can always take your first Cyclo ride through the calmer backstreets. And it’s best to confirm the price before getting in; when it comes to haggling it’s standard practise to offer a third of the price requested. Or you can just ask the staff at the Golden Cyclo Hotel to arrange a ride for you. 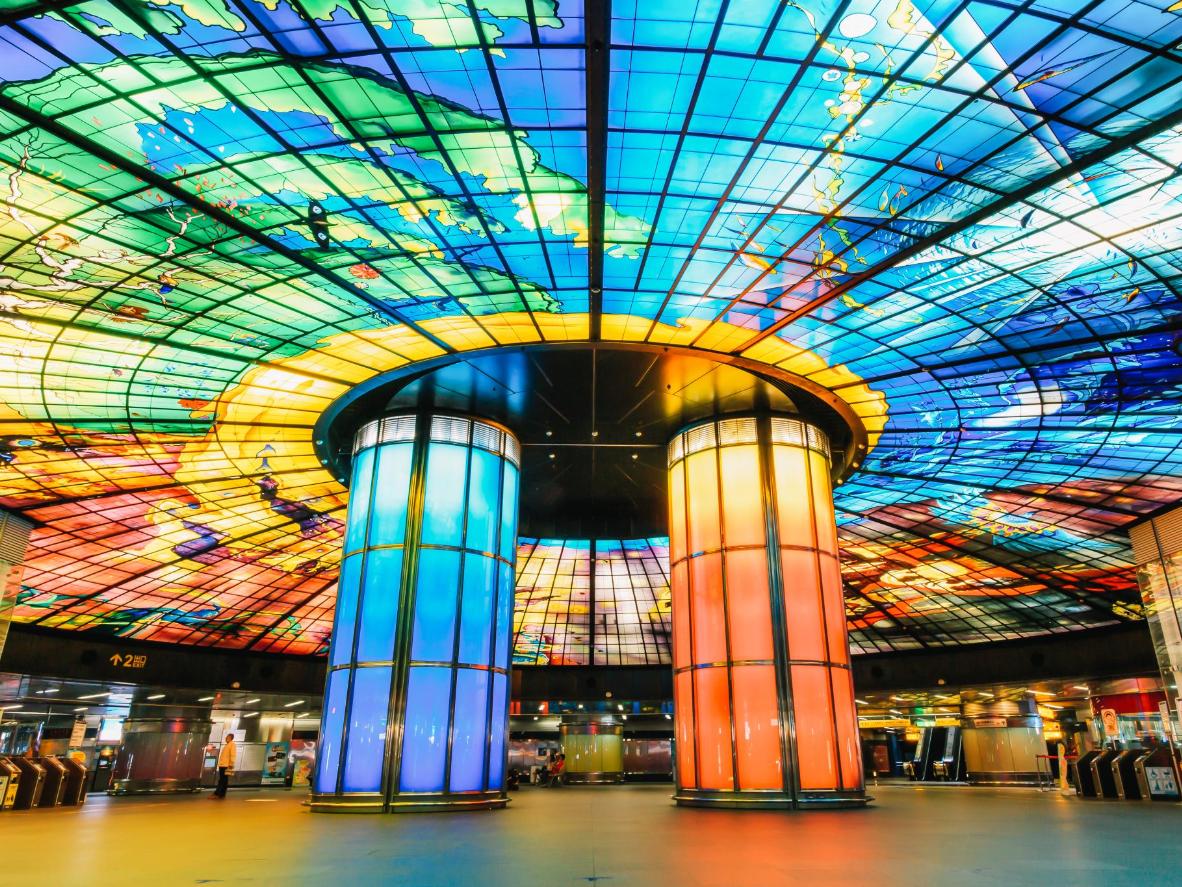 The Dome of Light in Taipei, Taiwan

The Forest Bus in Taipei was a temporary exhibition but, thanks to its popularity with locals and tourists alike, there is talk of it being made an annual event. So you may still get a chance to ride this verdant vehicle. An installation from floral designer and artist Alfie Lin, the bus’ temporary nature was due to the seasonality of the plants on board.

While you’re waiting for the bus (to return) head over to Kaohsiung and check out The Dome of Light. Created to commemorate the founding of Taiwan as a democracy, this stained glass feature is hidden in a XinXing subway station and inspired the name of the nearby Light Hostel Kaohsiung. 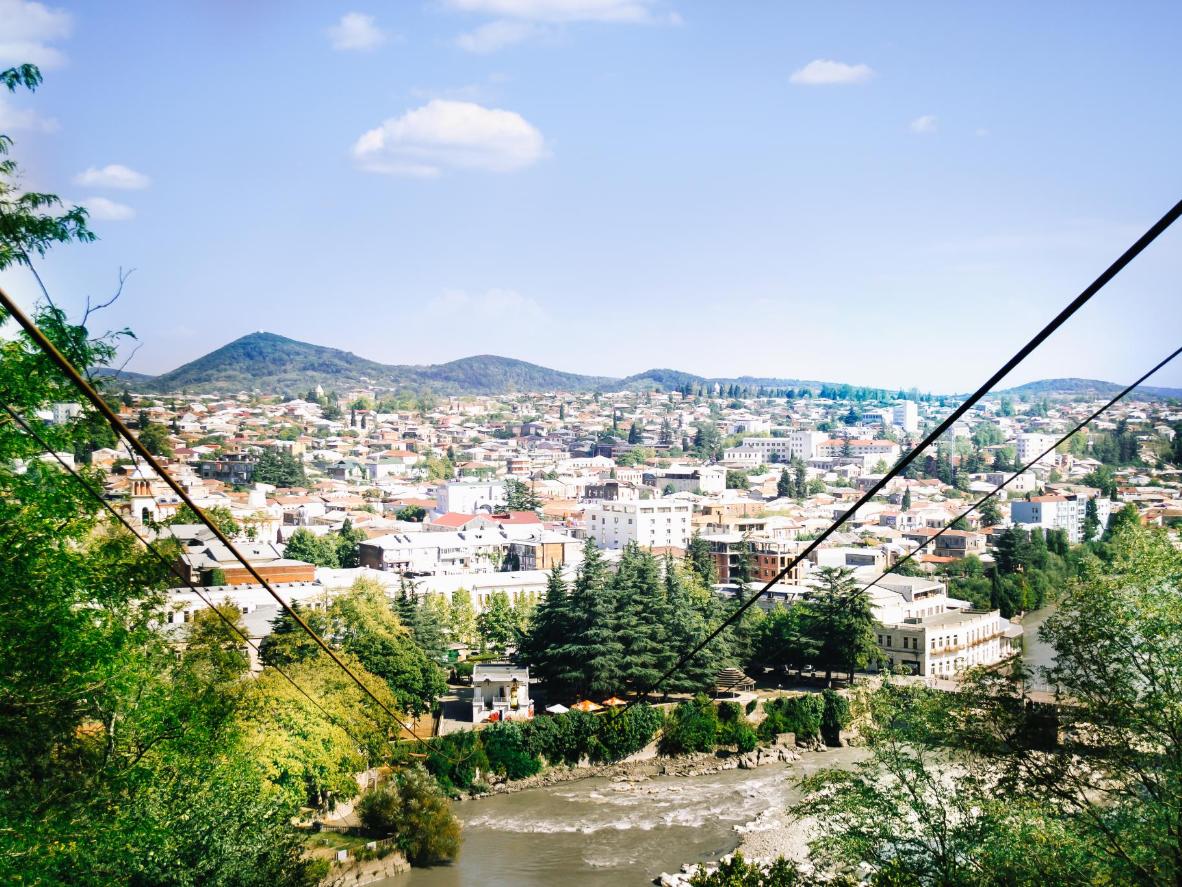 The Cable Cars in Chiatura

The Cable Cars in Chiatura are another unique form of public transport that probably aren’t going to be around much longer, although considering that they’re locally known as ‘the flying coffins’ there is some debate as to whether this is a bad thing.

Originally built to transport miners through the near-impossible-to-navigate craggy landscape surrounding Chiatura, these rusty cable cars remain in use today and at least 17 stations are still active.

As Chiatura is still a working mine there aren’t many options to stay nearby but the breathtaking view is still worth the trek. Check into Hotel Harmony at Kutaisi and leave early to catch the cable cars at sunrise. 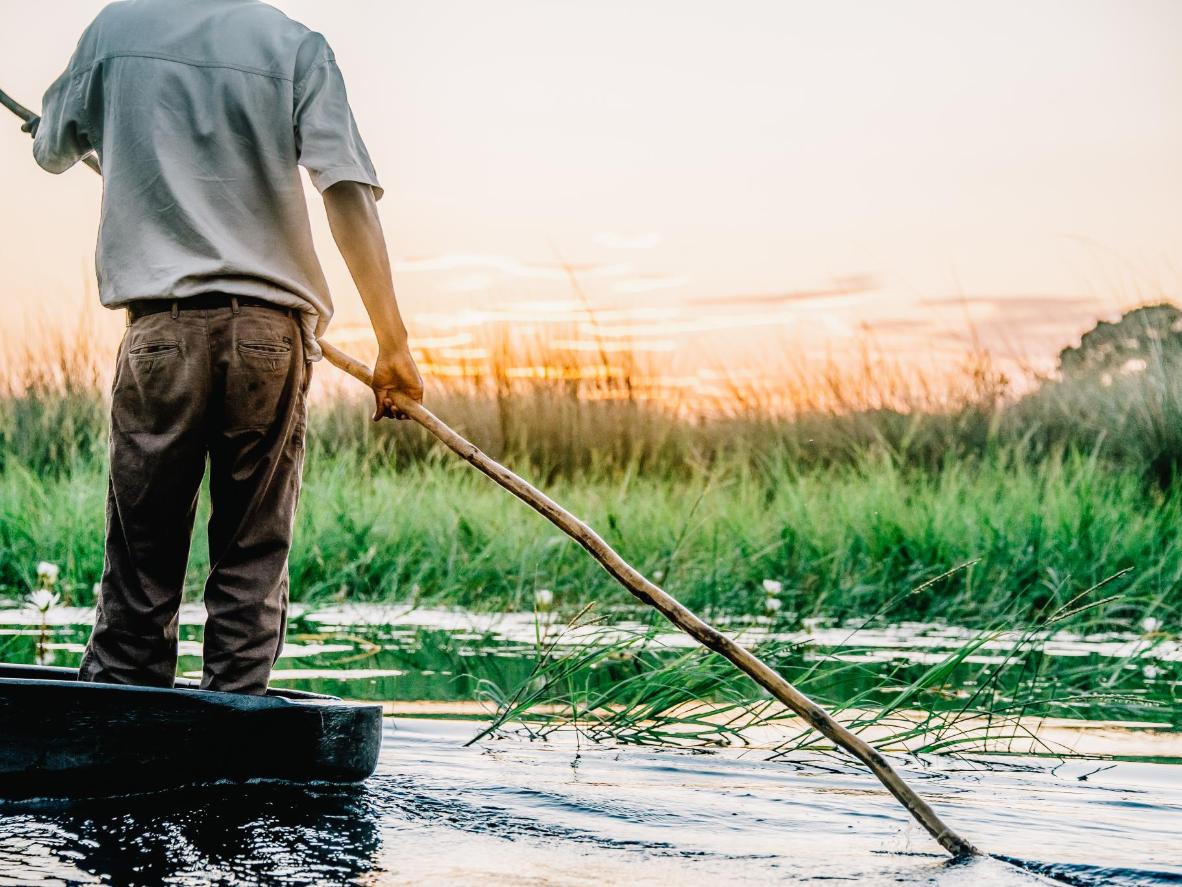 An oarsman pilots of Mokoro in Botswana

Pretty much the only way to navigate Botswana’s Okvango Delta – one of the world’s most mesmerising wetlands – is via lightweight canoes known as ‘Mokoro’.

These two-person canoes are propelled through the water. The oarsmen (who stand at the back, rather like Venetian gondoliers) are trained to pilot the canoes from the age of seven and their deft steering means that the local wildlife are less likely to disappear the second your Mokoro enters the water.

Mokoros are a wonderful, environmentally conscious, way to see one of Africa’s most stunning natural habitats and if you want to keep the rest of your trip just as green check into the Enviro Villa in the nearby town of Maun. 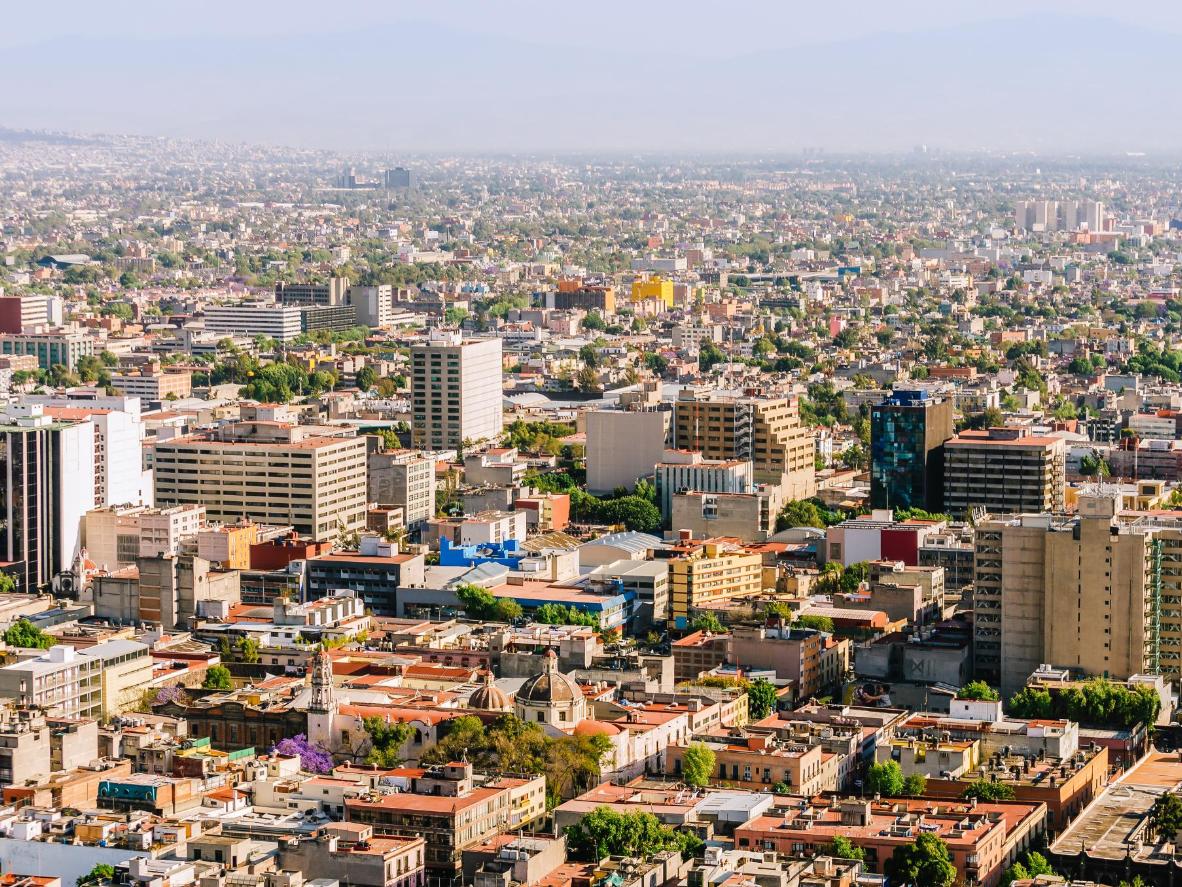 The Mexicable in Mexico City

Despite the name, the ‘Mexicable’ is not actually a cable car. These recently-installed floating gondolas run on a track, stretching three miles across some of Mexico City’s most colourful, neighbourhoods.

The ‘Mexicable’ was originally designed to ease traffic congestion in Mexico’s capital city. The local council commissioned a group of international and local artists to paint bright, attention-grabbing murals along the route. This has helped make the ‘Mexicable’ as popular with tourists as it is with locals and gone some way to rejuvenate some of the city’s previously neglected districts.

For an alternative view of the city, check into the towering St. Regis Mexico City or pop into one of their award-winning restaurants to watch the sunset.