From underground Californian gardens inspired by Sicily’s catacombs to the bunker complex from which Churchill directed Britain’s part in WWII, there is a whole world of subterranean wonders that are well worth travelling for.

Here are six of the world’s most astonishing.

The Wieliczka Salt Mine, Poland 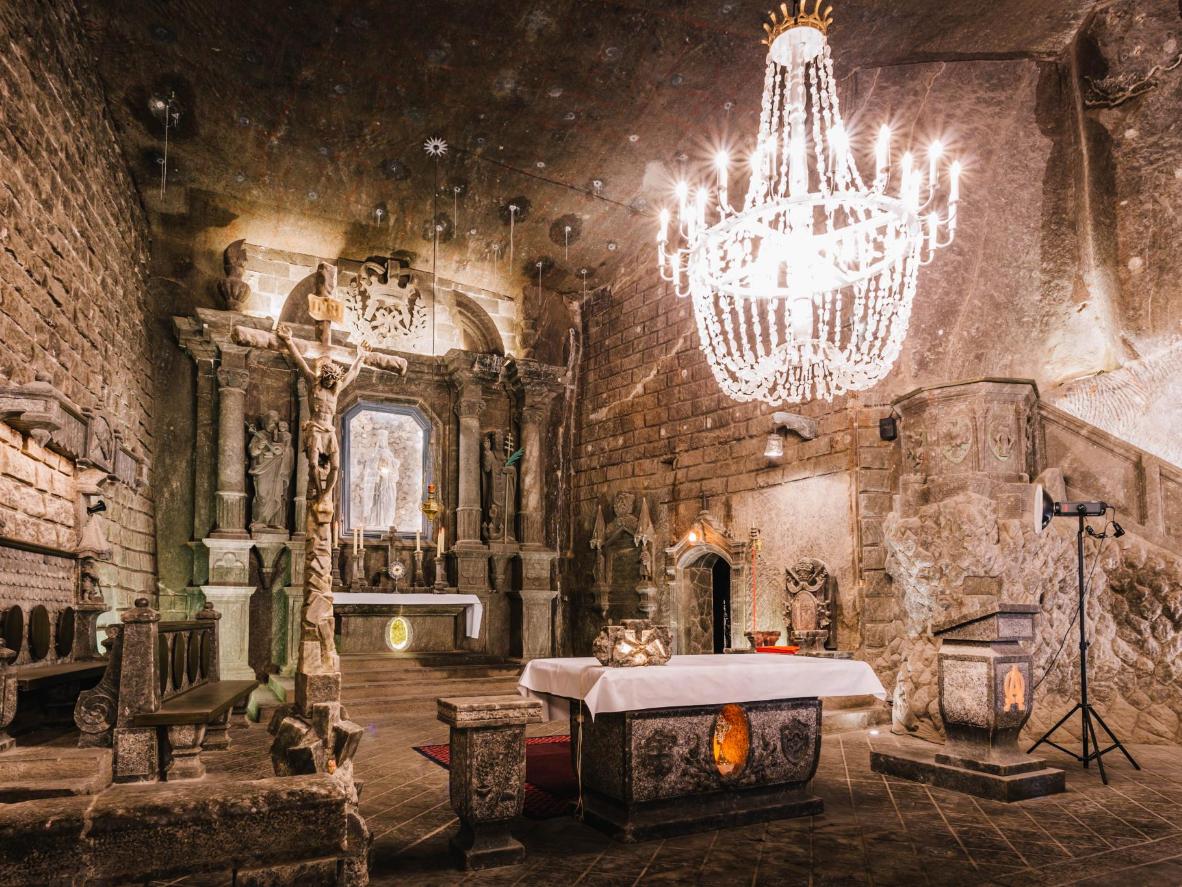 Rock salt chandeliers in the 13th-century Wieliczka Salt Mine

Not far from Kraków, the Wieliczka Salt Mine looks like an evil genius’ underground lair. The mine came into being in the Middle Ages but hasn’t been in working use now for several years. Instead, tourists can clamber through its grey passageways and admire lakes, statues, chapels and an entire cathedral carved by miners; the latter even features chandeliers made out of rock salt. Stay in a light-filled, modern loft suite above ground at PURO Kraków Stare Miasto in the Old Town, a launchpad for exploring Kraków’s sights as well as visiting the mine. 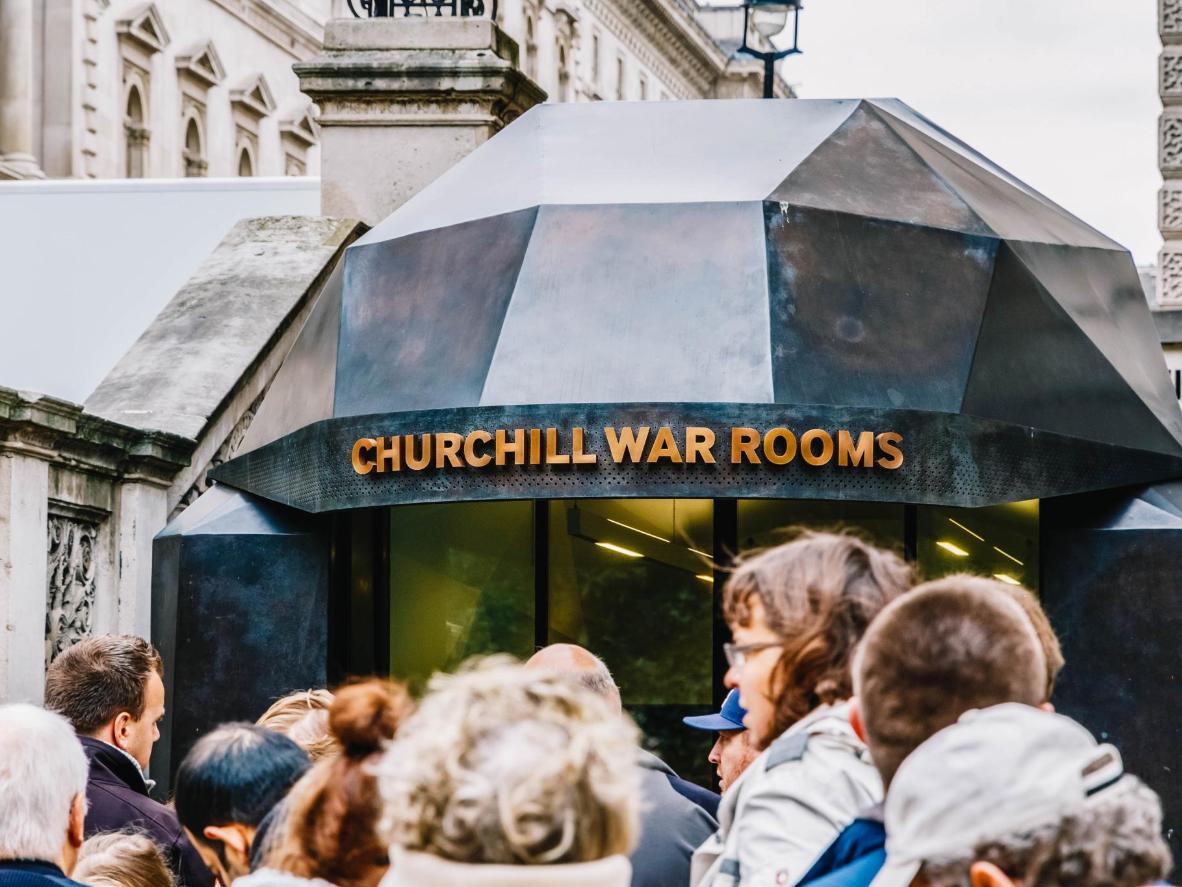 Tourists queue to get into the fascinating underground complex, the Churchill War Rooms

Just 12 feet below Whitehall lies a labyrinth of military rooms, dormitories and offices, from where Churchill led Britain through the Second World War. Now preserved as part of the Churchill War Rooms museum, this underground complex is open to visitors and guarantees one of London’s most thrilling historical experiences. Wandering its maze-like corridors, you get a spine-tingling sense of the reality of WWII and the gravity of keeping the war rooms top secret; massive military maps are still covered in strategic pins, the clocks are all set to 4.58 (the time at which the first ever cabinet meeting took place here on 15th October 1940) and you can see Winston Churchill’s private bathroom (a room that had a permanent ‘engaged’ sign on it and which actually housed a secret direct line to President Franklin Roosevelt). You can even see the marks on Churchill’s chair where his signet ring and fingernails scratched the wood in tense moments. And see the rooms from where his rousing, morale-raising speeches were broadcast to the nation during the Blitz. Stay at the Sanctuary House Hotel, a classic hotel in the heart of Westminster and a short walk from the War Rooms. 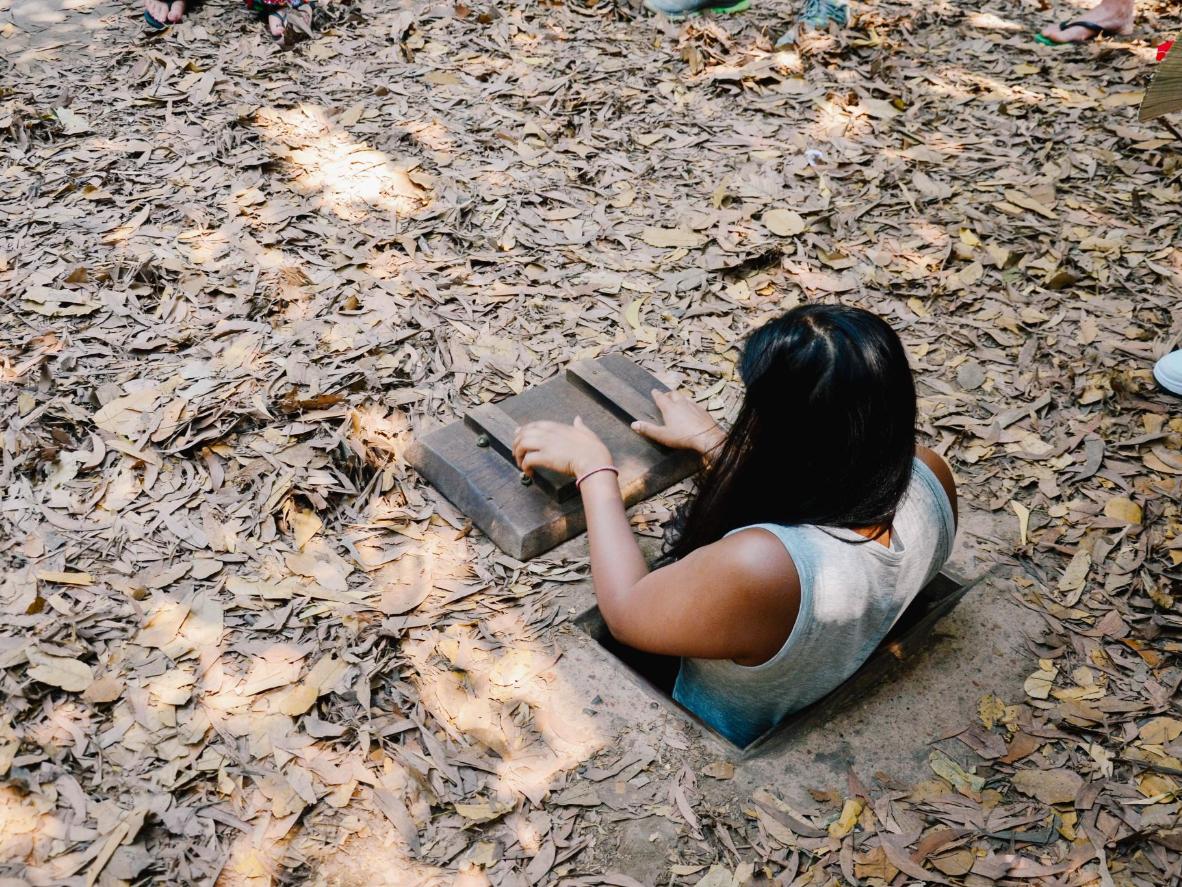 If you’re feeling brave, you can try to go down the tunnels at Củ Chi in Vietnam

The underground tunnels built by the Viet Cong – Vietnam’s Communist guerrilla troops spread for thousands of miles beneath jungle and rural villages. The Củ Chi section of this subterranean network spans 120 miles of tiny, claustrophobic spaces that sink deep into the ground. From here, guerilla forces could lay booby traps and mount surprise attacks, before disappearing to safety through leaf-covered trap doors in the forest floors. Now a chilling war memorial, visitors can squeeze through these narrow tunnels (some no more than two-feet wide) and see underground conference rooms where crucial military campaigns like the Tết Offensive were launched during the war. Stay in Ho Chi Minh, from where you can easily visit the Củ Chi tunnels; Jan Hostel is the most highly rated accommodation in the city, with its own garden and barbecue facilities. 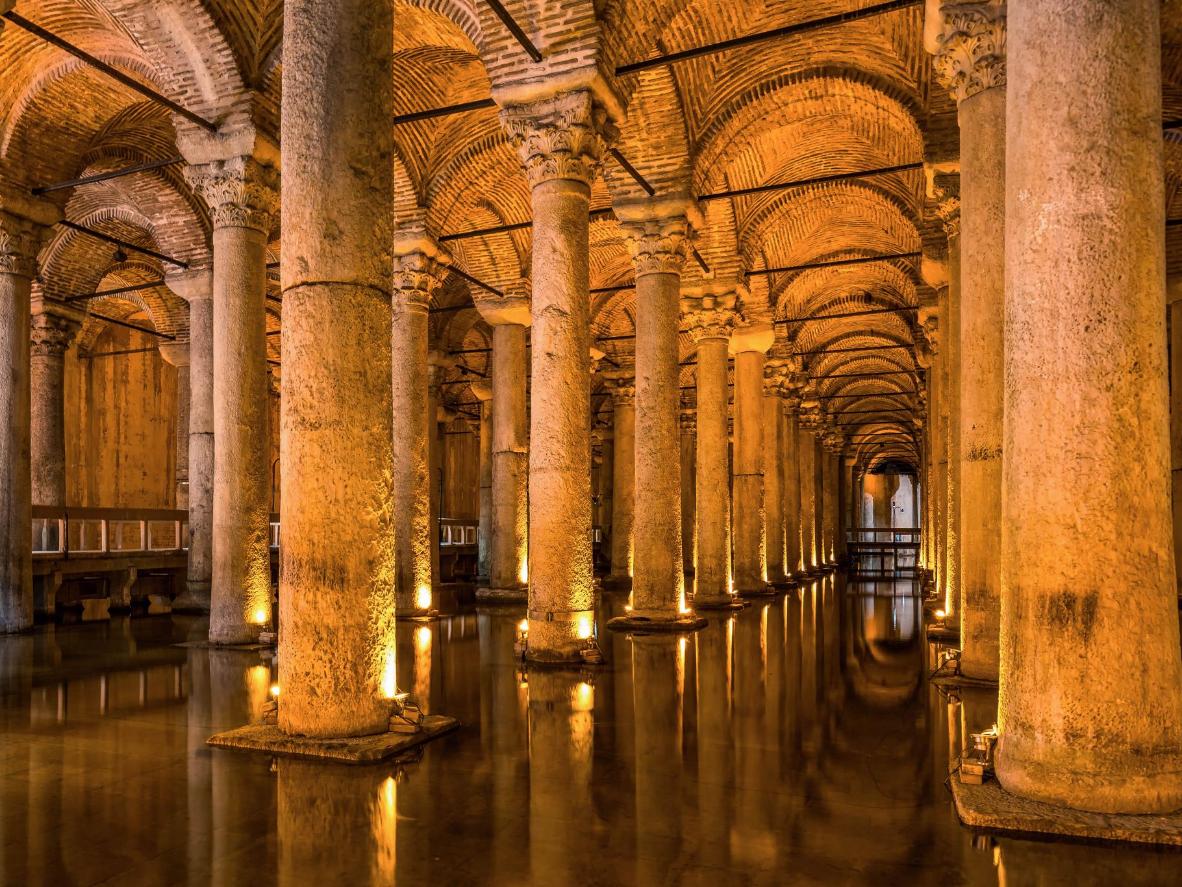 Even when the midday sun is beating down on Istanbul’s streets, the ancient, underground Basilica Cistern remains cool, dark and eerily quiet. It was built during the 6th century by the late Roman or early Byzantine Emperor Justinian the Great to act as a royal reservoir, storing up to 24 million gallons of water. This vast cistern has a vaulted ceiling supported by 336 marble Ionic and Corinthian columns. Walk to the far end, with nothing but the sound of dripping water accompanying the echo of your footsteps, to admire the two grandest columns, with sinister-looking carved Medusa heads at the base. Just a 3-minute walk from the Basilica Cistern, the Sura Hagia Sophia Hotel is right in the middle of the Old City and has a beautiful outdoor pool, botanic garden and Turkish spa. 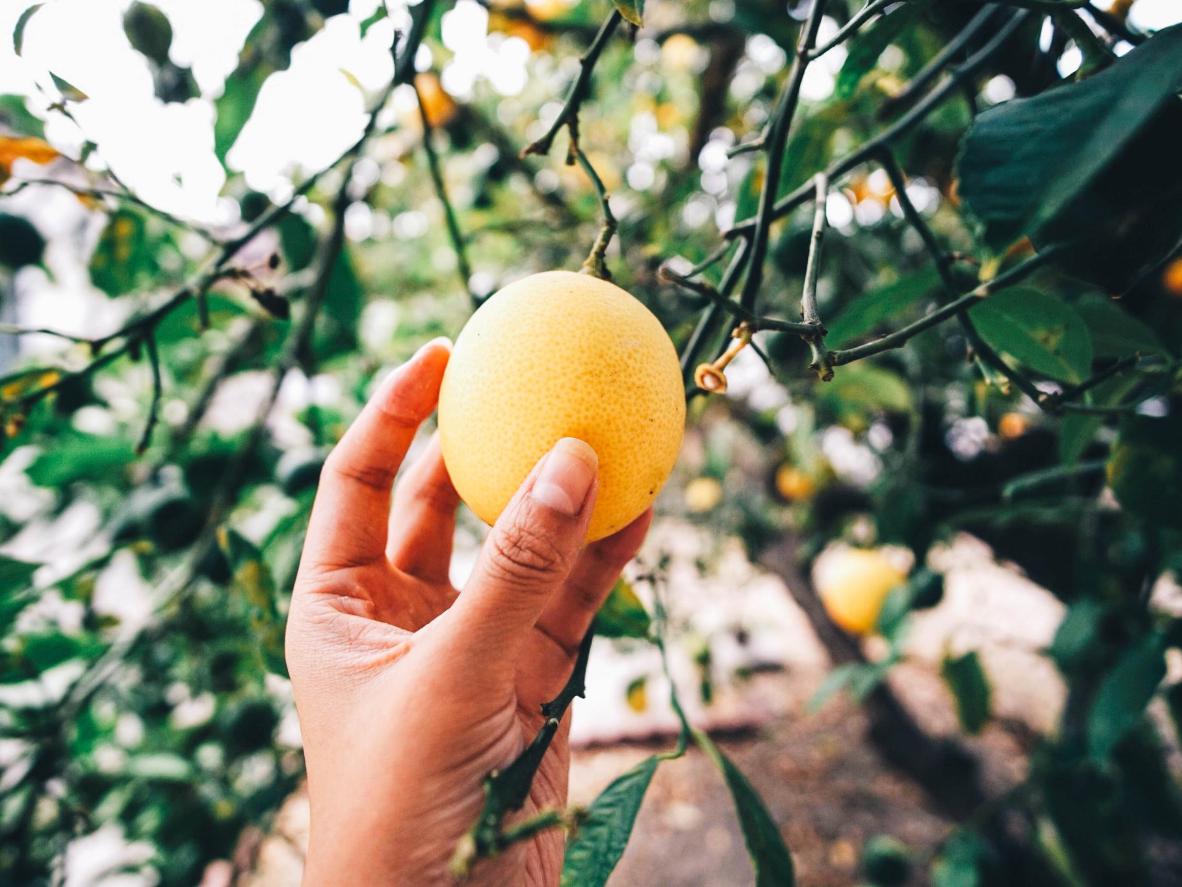 Encounter a subterranean garden with grottoes and orange trees in California

In 1906, Sicilian artist Baldasare Forestiere began a 40-year labour of love constructing an underground garden inspired by Italy – in California. Having arrived in the USA to pursue a career as a citrus farmer, he soon realised that he’d have to dig deep to reach suitable soil and that working underground provided respite from the harsh summer heat. Creating a world inspired by Sicily’s ancient catacombs, Forestiere ended up with a remarkable 10-acre space featuring a chapel, a fishing pond, grottoes and orange, lemon and grapefruit trees. Stay right next door at the family-owned Garden Inn and Suites Fresno. 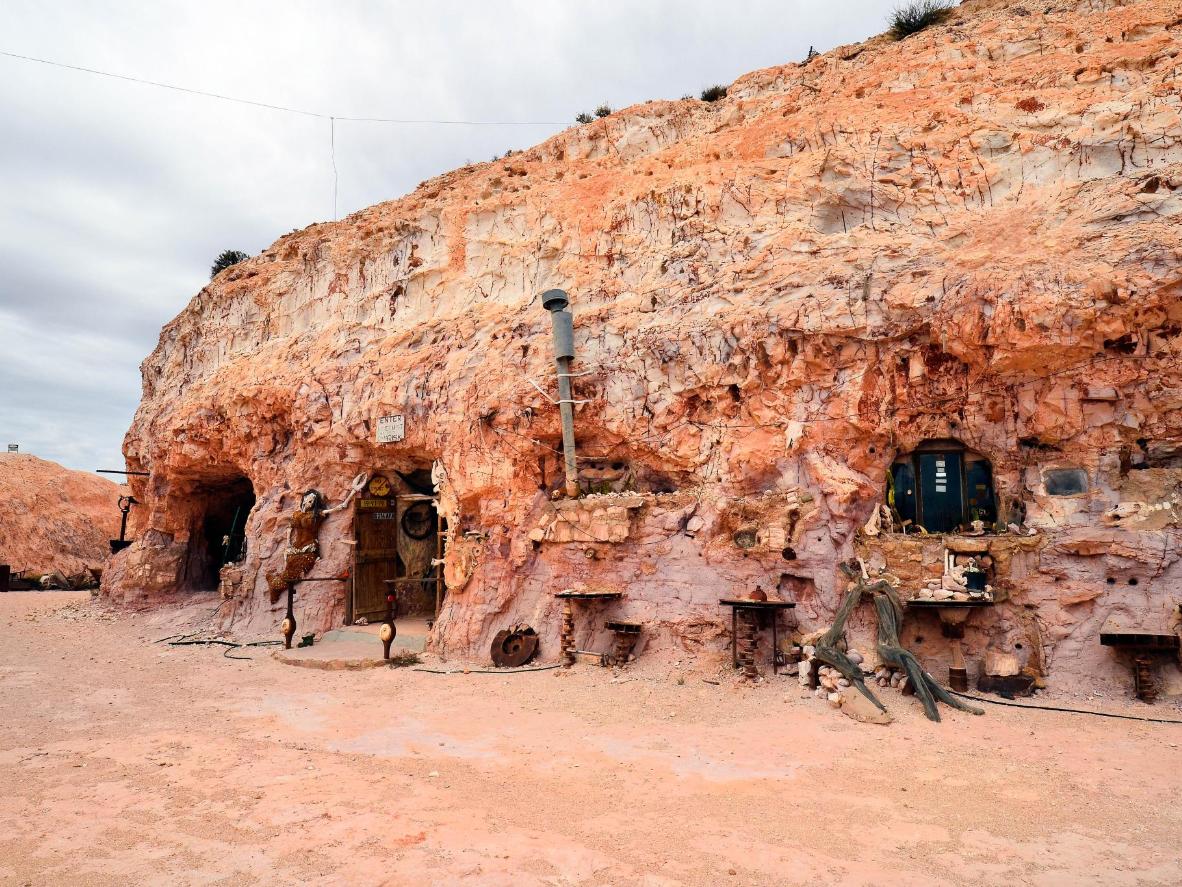 The former home of local character, Crocodile Harry, built into the rocks in Coober Pedy

In 1915, the 14-year-old son of a gold prospector chanced upon an opal in the dust in the desert of South Australia. As a result, the mining town of Coober Pedy was born and – due to the miners’ struggle to cope with the extreme temperatures – built underground. These subterranean dwellings confused the local Indigenous Australians somewhat; the name Coober Pedy comes from an Aboriginal phrase, which translates as ‘boys’ waterhole’. Nowadays, visitors can stay in underground hotels and visit this cave-like town’s restaurants, galleries and local church. There’s even an underground campsite where you can pitch a tent in an abandoned mine. Get the full Coober Pedy experience by staying at the Lookout Cave Underground Motel.